First, all week I helped TechSh*p ramp up for The Maker Faire.  But before that, on Friday, I caught wind of the Shipyard (a collaborative build space for Mechanical, Electronic, Kinetic Art) was getting kicked out of the "culturally diverse and artist friendly city of Berkeley".  This is a place I have been meaning to visit for a while now.  As soon as I heard they were in trouble (for earthquake code violations) I ran down (Saturday) to get one glimpse at what they were before they had to up root.  While there, I helped them chuck and load all sorts of art/tools/materials for about 8 hours.  I also helped them dismantle the Neverwas Haul for towing to the Maker Faire on Thursday.  Just trying to make sure they had a chance to get ready for maker fair AND move their crap.

I also helped out Orb-Swarm on Wednesday.  Trying to help make sure they got to Maker Fair with their proto-orb in tact.

At the Maker Faire, I showed up at 7:00am, got the CNC plasma cutter up and running, finished up my sign (got to love an event where you have the tools you need to finish getting ready for the event) and show that off to dozens of people (including two camera crews! G4 and PBS!  Woot!)

Additionally, at Maker Fair, I helped make Salmon Costumes for Breakers to Bay (we run a 1.5 miles, upstream, against the current of Bay to Breakers, in Salmon Costumes, and then spawn when we reach the starting line.)

We gave the costumes a trial run at Maker Fair.  Along the trial run, we invaded the stage during the Swap-O-Rama-Rama fashion show (which Wendy Tremayne loved, BTW,) spawned, ran around, spawned, climbed the "Neverwas Haul", spawned, stood in concession lines, spawned, and last, but not least, ran into the Battle Bots Arena between bouts, and spawned, in front of hundreds of confused makers, attendee's, and their children!  I laughed so hard, milt sprayed out my nose!

milt (n.)
1. Fish sperm, including the seminal fluid.
2. The reproductive glands of male fishes when filled with this fluid.
Then, I went to Hallie's house and finished up the salmon costumes until 2:00am.

The next day, we awoke at 5:30am, and dragged our asses 1.5 miles in to the Bay to Breakers course.  Everything went as planned, and the entire way down, I pointed toward almost every woman within shouting distance and yelled, "Hey baby, what's your number?  We should spawn!"  Yes, it was repetitive, but it was good practice for delivery and audience participation.  It was great, too, because I'd watch people totally unprepared to receive a joke look blankly at me, run a few feet, then bust up laughing.

Once that was over, it was back in to my car, and back to the maker fair, where I loaded up on clothes from Swap-O-Rama-Rama, worked for TechSh*p some more, and ran around taking in as much as I could see. 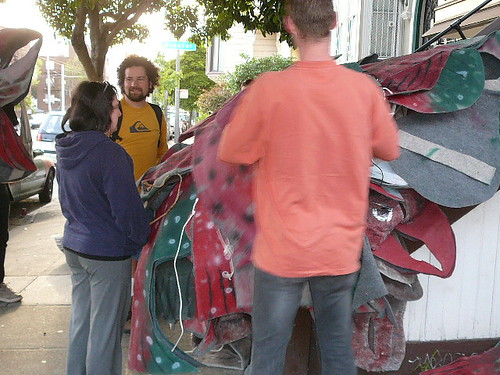 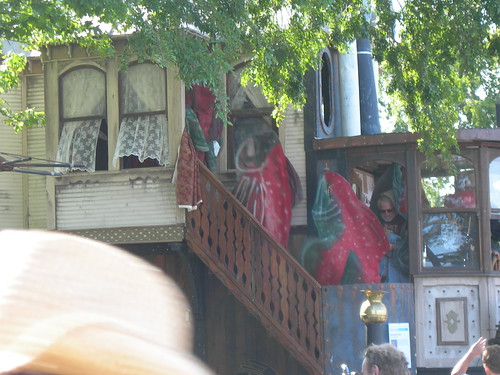 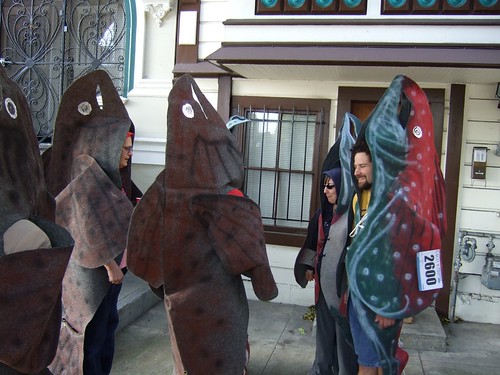